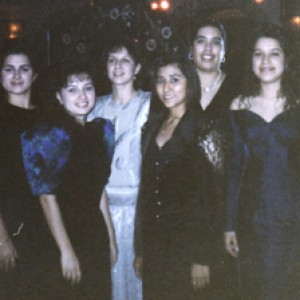 Gamma Phi Omega International Sorority, Incorporated (Gamma Phi Omega) was the dream of Founding Mother, Veronica Montemayor. It was her vision to become part of an organization where Latina women could relate in their shared cultural values and experiences. After considering Indiana University’s traditional Greek system, Veronica felt it did not encompass her needs nor what she was seeking.

Over time, Veronica was joined by a core group of women who shared her spirit: Monica Guzman, Cristina Rodela, Margaret Escabalzeta, Laura Garcia, and Barbara Graves. After extensive research and efforts, the group agreed that there was not an existing organization that fit their needs. They decided that it was time to create a new option, one that celebrated the diversity of the Latino culture. With the support and influence of Georgia Burgueno, Coordinator for Latino Services, Dean of Latino Affairs, Alberto Torchinsky, and Dean of Student Affairs, Dr. Richard McKaig, the women formally began their journey. They assured Indiana University’s administrators that the creation of a new Latina-oriented sorority would not only survive on the Bloomington campus, but it would also enhance the already existing Greek community.

Convinced, the women were granted permission to work on an Alpha chapter. On April 17, 1991, Gamma Phi Omega was founded. 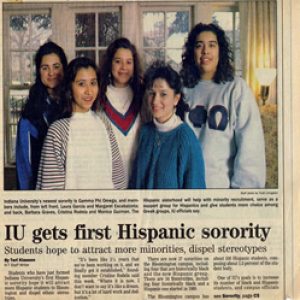 Since that time, Gamma Phi Omega has continued to expand. The sorority has evolved; however, the values of the organization remain intact. Sisterhood remains the core foundation, and we strive to empower women through set goals. Although Latina-oriented in our roots, Gamma Phi Omega unites women across an array of cultures. Members uphold the legacy of the founders and have broadened the scope of the original six women to reach and inspire hundreds. We are committed to the values of diversity and inclusion in order to attain and maintain excellence within our sisterhood providing women an equal opportunity without regard to race, age, sexual orientation, national origin, religion, marital status or disability.